Whether you have a Frisbee loving agility dog or senior animal friend, decreased movement can occur for diverse reasons:  inflammation from soft tissue injury (e.g., from infection, trauma, stress, overuse/fatigue; constant micro strains or sprains); an injection reaction; edema; a scar; instability from an under or over mobile joint; lack of exercise; muscle atrophy; an arthritic bone spur; or referred pain, for example, from chronic abdominal conditions (kidney, liver, pancreatic or heart disease).  De-compensations occur when the efforts to protect the body in one area start to fatigue resulting in pain in the areas of compensation.  Think for example of dogs with hip dysplasia as they struggle to rise from sitting or climb stairs with no thrust from behind. They compensate by shifting their weight forward off their painful hips and are practically standing on their two front paws; chronically pulling themselves up with their forelegs, they become painful in the chest, shoulders, and forelegs.  The reverse happens when dogs with elbow arthritis hesitate to go down stairs or get hunched backs as they try to shift their weight to their hind legs.  How can we help our animal friends feel more ease in their bodies?

In addition to acupuncture, herbs, and anti-inflammatory medications, manual therapies may be beneficial.  Below is a very brief comparison of chiropractic and osteopathy, and there are times when either one or both could be beneficial.  The definitions and example are over-simplifications, given purely for illustration in a few sentences, and the two-dimensional example is only a suggestion of multi-dimensional anatomical movement.  Also, I am omitting network chiropractic.

Both chiropractic and osteopathy start with an assessment, but then their approaches diverge considerably.  Chiropractic focuses on a motor unit (two adjacent vertebrae and all the adjacent soft tissue) and addresses subluxation complexes: areas of misalignment of one or more articulations on the spine or its immediate weight bearing surfaces, which cause change in nerve function.  For a fictitious example, imagine a bone in neutral alignment rests in a horizontal position relative to its neighboring bones that makes up a joint (Figure 1).  Now let’s pretend the bone has a subluxation where it is fixed obliquely up on the right side and cannot move down on that side; we would say there is a restrictive barrier or an area of decreased range of motion on the right side.  A chiropractor would make an “adjustment” to restore the normal joint range of motion (Figure 2).  An adjustment is a short lever, specific, high velocity, low amplitude and controlled thrust by hand or instrument, which is directed on a specific joint. The thrust, which must follow the angle and plane of the joint, would be directed in the direction of the restriction, in this example, down on the right side.   The thrust of an adjustment is quick and does not facilitate conscious learning how to release restricting patterns or learn options, although it does potentiate (activate and enhance) many neurons for joint health. Typically, dogs or cats stand while receiving an adjustment.

Developed in the USA at the end of the nineteenth century by Andrew Still, M.D., osteopathy is a manual therapy that focuses on seeing the body as a holistic, unique, and functional unit consisting of diverse components: cardiovascular, craniosacral, endocrine, gastrointestinal, respiratory, neurological, musculoskeletal, and mental/emotional.  Osteopathy addresses somatic dysfunctions, using a low velocity indirect functionally integrated technique.  In the example above, after the assessment, the osteopath would manually connect with the soft tissues and bone with an inquiry: “In which direction does this bone /tissue move with the greatest ease?” S/he would guide the bone away from the restrictive barrier, towards ease, in this example, up on the right side.  The practitioner then uses the new dynamic balancing point between the passive and active range of motion of the joint to facilitate the unwinding of tissues and bones as they follow their innate intelligence to restore homeostasis (Figure 3).  In this sense, osteopathy is akin to strain-counterstrain and is more of a following process than a directing one.  This method can be used wherever there is a restriction in tissue, not just in a subluxation complex.  A session often is ¾ to an hour in length.  Typically dogs (or cats) will be lying on their side, sometimes sitting, and participate with focused inner awareness, learning how to release habitual holding patterns and learning new options for moving, thus fostering neuroplasticity.  Many animals leave an osteopathic session very relaxed, yet also happy, sometimes even exuberant.

A few caveats:  If an animal walks in lame, s/he may walk out lame; the body may need time to heal and adjust to new somatic patterns.  An adjustment or manipulation at a specific joint would be unwise when there is arthritis, cancer, infection, acute inflammation, or a ruptured disc at that joint.  However your animal friend still could benefit from a whole body osteopathic session at those times.  And while animals with arthritis in any of their joints will benefit from medication, they also may experience more overall ease for decompensating areas of their bodies after an osteopathic session and the healing power of touch.

Though certified in chiropractic, I prefer to practice osteopathy, infusing the latter with my training as a Mind Body Studies Practitioner (a somatic form of education in the Feldenkrais heritage). 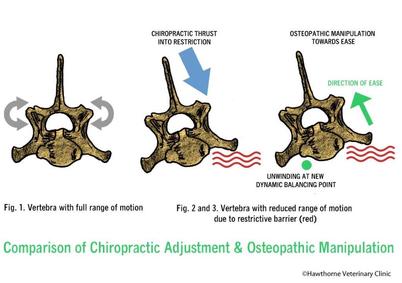